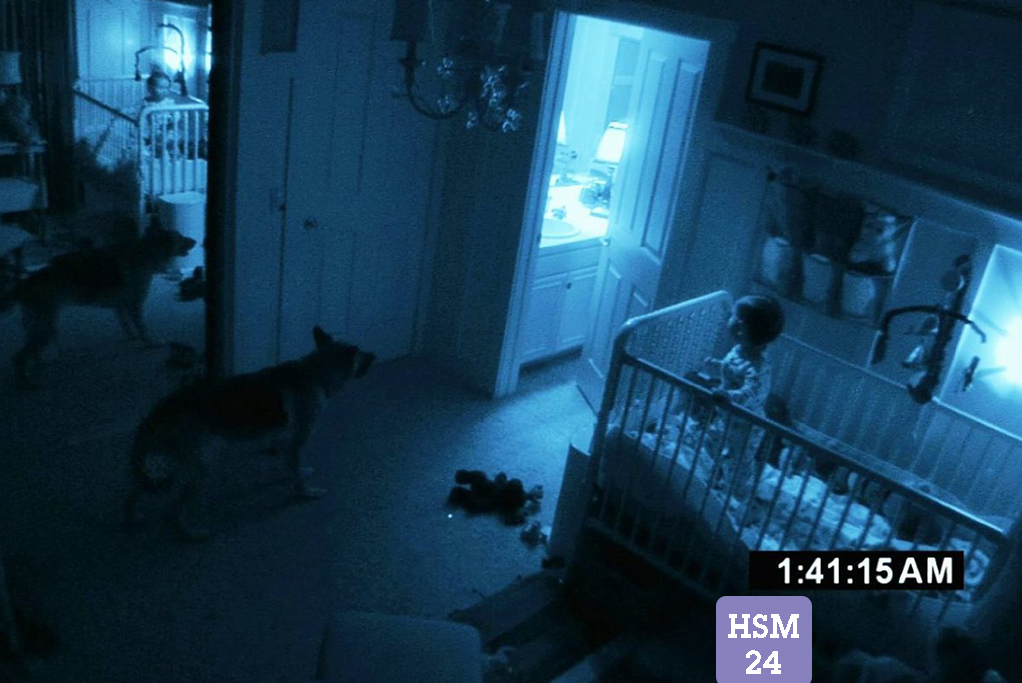 Considered a parallel sequel, “Paranormal Activity 2” takes place most before the original, but also during and after. Containing the found footage style, “PA 2” is just as inventive as the original. But there’s enough fresh ideas to make it slightly scarier than the original and enough new character developments to move the series in the right direction.

If ever there were a horror movie that was bound to produce a long-running series, it was “Paranormal Activity.” It began and ended with loose ends with a demonic antagonist that slowly teased through the film’s 86-minute run time. Also, it was insanely profitable–  the most profitable film ever made based on return on investment (made for: $15,000, box office: $193.4 million).

Beginning two months before the original, “PA 2” follows Kristi (Katie’s sister) and Daniel Rey. The young California couple experiences what appears to be a burglary. Daniel installs security cameras in and around the house and immediately begins capturing increasingly malicious paranormal activity– this time on multiple cameras.

For the most part, the sequel follows the same sort of set-up as the original. The girlfriend experiences activity from the demon, leaving her to try to convince an initially skeptical boyfriend. The activity grows more sinister as the characters do research that reveals tidbits of information about what the demon is and what it wants. But before any substantial revelations are made, the demon overpowers the family and takes what it wants.

“PA 2” had a lot of high and varying expectations attached to it. In addition to living up to the hype of the original (which was the most talked about horror movies in years), it was very clearly meant to tease out a bigger narrative. The success of this film meant more sequels, prequels and spin-offs, of which “PA 2” received one of each. In its opening weekend, it broke the record for biggest opening for a horror movie of all time.

For the most part, “Paranormal Activity 2” was successful in accomplishing exactly what it seemed set out to do: terrify and keep the momentum of the original going.

The concept of very slowly rationing out little details of the Paranormal mythology has played a major role in the series’ mass appeal. It’s mostly worked well for the series, with a few exceptions. Like the original, “PA 2” has the responsibility of producing scares that begin slowly, kick into high gear in the finale and end with the audience wanting more.

Without using the original as a crutch, “PA 2” merges with the original story at different points in the series. Afterall, Katie and Kristi are sisters. And as most probably assumed, they share a connection with the demon (“PA 2” suggests that their ancestors may have made a deal with some sinister forces).

“PA 2” benefits from the demon’s very physical presence in the series. In addition to possessing characters, it also uses whatever is in the room to torment whomever it’s targeting. So being able to see this activity unravel through multiple lenses (Daniel sets up about four and also uses a handheld) is thrilling. Scanning the screen for the titular activity is even more enjoyable than before now that it switches between multiple rooms. And of course, adding dog and a baby into the mix heightens the urgency even more.

Some might find some of the pacing a bit exhausting (“PA 3” is probably the best in the series in this respect). The scenes in the first act that contain neither demons nor human characters can sometimes feel more like empty filler than genuine build-up. But the final half of “PA 2” more than makes up for its initial shortcomings. “Paranormal Activity 2” is a worthy, slow-burning entry of the series.

The first three “Paranormal Activity” films are available on DVD, blu ray and digital download here on Amazon. And be sure to check out the other entries in the Horror Sequel Marathon right here on My Vinyl Muse!