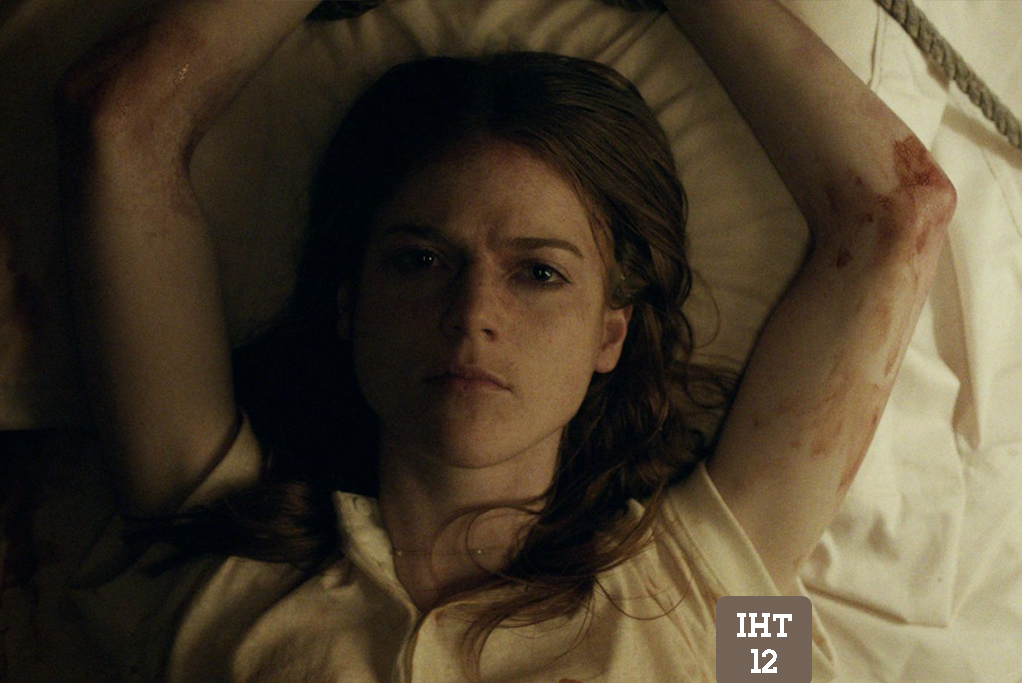 In what might be one of the worst date movies ever made, Honeymoon is a tense, stylistic horror film that capitalizes on a very primal sense of relationship anxiety– is the person you’re committed to really who you think they are? This directorial debut from Leigh Janiak is a two-person fright fest that slowly builds up to its worth-while finale.

Honeymoon follows newlyweds Bea and Paul on their romantic honeymoon to a cabin located near a wooded lake area (filmed in North Carolina). The besotted couple spends their first day venturing around their vacation locale, which appears mysteriously deserted despite the housing development that surrounds the lake. In the middle of the night, Paul discovers Bea naked, bruised and disoriented in the forest.

According to Filmmaker Magazine, while writing Honeymoon’s script, Janiak was inspired by the idea that “Even small moments though can drive a wedge between people” and with her writing partner, wondered “how far we could push them until they started falling apart.” After Paul finds Bea in the woods, he begins to notice that her behavior seems less like the Bea he fell in love with, and more like a complete stranger pretending to be Bea. This elevates the drama and mystery in slow build up.

Planning for Honeymoon began in 2010, after Janiak viewed Monsters and Tiny Furniture. Principal photography began in spring 2013 and had a limited budget. The film had its world premiere on March 7, 2014 at South by Southwest. It was also a Tribeca Film Festival 2014 Official Selection.

The first act effectively sets up the couple’s cheery, trusting relationship. In fact, it’s easy to imagine Honeymoon shifting into a romantic drama following its initial 15 minutes. The genuineness of their mutual affection is validated early on, and it’s expertly juxtaposed against the shadowy dread that follows. Their chemistry makes it easy to root for them when things go terribly wrong. Without that, Honeymoon would be hugely disappointing.

Janiak chose Rose Leslie to perform as Bea after viewing her performance on Game of Thrones. Treadaway has played in critically acclaimed films such as Control and Fish Tank. Honeymoon marks both actors’ debut in starring roles.

Although casting two European actors into American roles seems a bit odd, Rose Leslie and Harry Treadaway (whose accent is sometimes a bit shifty) portray Bea and Paul marvelously. The introductory scene contains short clips from their wedding video and honeymoon video diaries, in which they proclaim their mushy-gushy relations. It’s effective, because it feels familiar– it’ll likely remind you of a sometimes annoyingly affectionate couple that you know in real life.

Utilizing minimal but effective special effects, writer-director Janiak builds on the sense of dread and mystery like a veteran filmmaker. Movie-watchers who want all of the answers to Honeymoon’s narrative questions neatly laid out in front of them will certainly be disappointed. Honeymoon feels a little retro in its story-telling in that it lets you use your imagination to fill in some of the blanks. And in doing so, the film is much more resonant, possibly even nightmare-inducing.

Honeymoon isn’t over-reliant on a shocking or twisty climax, nor does any of its overwhelming tension distract from the characters. Janiak’s persistent focus on character conflict makes Honeymoon one of the best if not the best horror film to release this year. Honeymoon took what seemed like a played-out story structure in a cliche cabin in the woods and somehow managed to make it feel entirely new. Leigh Janiak proves to be a stylish filmmaker genre fans should keep a close eye on.

FINAL NOTE: Avoid watching the Honeymoon trailer, unless you want many of the key plot points spoiled. Honeymoon can be streamed on Amazon right here.