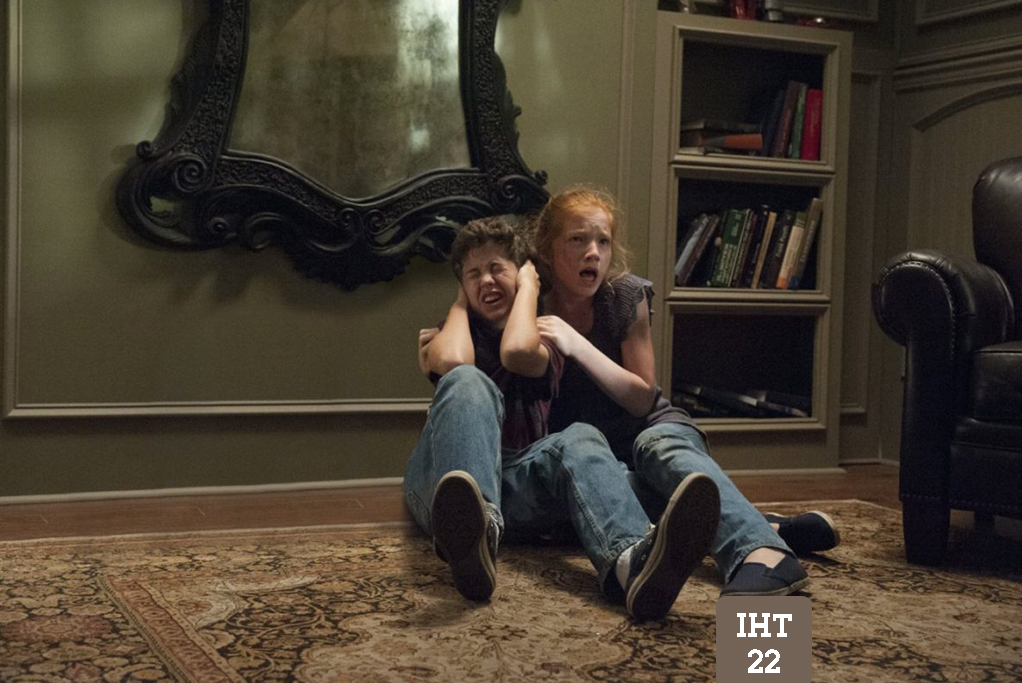 A haunted antique mirror is killing people. On the surface, Oculus looks like a horror movie cliche stretched into a feature film. Fortunately though, Mike Flanagan’s directorial debut is more clever than it appears, utilizing psychological tricks and sophisticated editing as one of the more atmospheric horror films of the year.

With a $5 million budget, Oculus was first released on September 8, 2013 at the 2013 Toronto International Film Festival. When it later received a wide release, it went on to make $40 million.

The film is based on a 2005 short film by the same director. The short contained only one setting, a single actor and a mirror. Shortly after its highly acclaimed release, it sparked interest in creating a feature-length film. Initially studios were interested in making the movie in the found footage genre, which Flanagan thankfully opposed.

While the idea to have the story take place mostly in one location transferred effectively to a 103-minute movie, it extended from a single main character to six– young Kaylie, young Tim, adult Kaylie, adult Tim and their parents. Expanding the ideas presented in the short film into a feature film proved difficult; Flanagan decided to tell the story with two timelines (past and present), told at the same time with flashbacks.

From the first act, we discover that 11 years ago, a small family (mother, father, 10-year-old son, 12-year-old daughter) brought a mysterious mirror into their home. Supernatural phenomena occurs and the father and mother die violently, with the son accepting responsibility for the murder of the father.

The son is admitted into a psychiatric institution, where he attempts to recover from the trauma and accept closure with the fact that his parents’ deaths were the aftermath of family dysfunction. When he’s finally released, he finds that his sister has constructed an elaborate plan to prove that the mirror had possessed her parents, leading to their deaths. And she needs his help to prove this.

Telling both stories at the same time was risky, but Flanagan’s narrative works remarkably well told from adult Kaylie and Tim’s memories– especially as both characters have opposite recollection of their childhood. The tense mystery heightens as the siblings are confronted with their pasts when Tim’s argument that their parents’ deaths were the result of an unhappy marriage grows thin.

The mystery is never fully quenched either, and that’s an important element that differentiates Oculus from other horror films about a haunting or possession. Our cravings for a definitive explanation are never really met, because Oculus doesn’t slow down from its frantic pacing to provide one. It’s an evil mirror; maybe that’s all we need to know until the inevitable (and desired) sequels arrive.

Annalise Basso and Garrett Ryan play their roles as young Kaylie and Tim with a very urgent sense of psychological struggle, making their scenes some of the most effective and terrifying in the film. Their combative but loving brother-sister relationship adds a needed sense of intimacy to the film. In order to survive the brutally manipulative antique mirror, they have to work together. And it’s an immensely gratifying relationship to behold.

For a movie that’s rated R partially for terror and disturbing images, Oculus isn’t all that terrifying or disturbing– especially by today’s standards. But the film thrives on its culminating sense of anticipation that rewards its viewers for picking up on the little details. Oculus is a skillfully-structured, fascinating horror flick that’s much, much smarter than its thesis synopsis will have you believe.

You can order Oculus on Amazon right here.