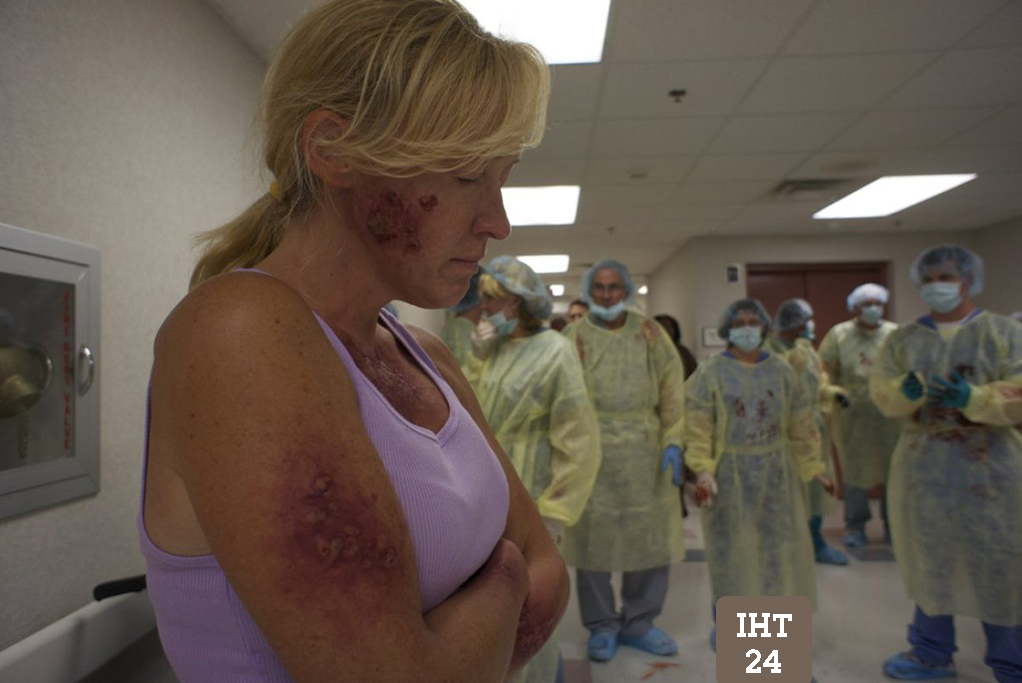 If Steven Spielberg’s Jaws didn’t scare you out of the water, The Bay should do the trick.

In the opening sequence, the film explains the footage was confiscated by the U.S. government until the anonymous source leaked the footage. What follows is presented in the same style and format as an eco-documentary, complete with dramatic mood music and environmental alarmists. The Bay mostly occurs over a 24-hour period, utilizing 21 different digital cameras, from iPhones to low-end consumer video cameras.

The Bay takes place in mid-2009 on Maryland’s Eastern Shore (though it was filmed in the Carolinas). Two researchers find a staggering level of toxicity in the water and attempt to alert the mayor. He refuses to take action fearing that he will create a panic. As a result, a deadly plague is unleashed, turning humans into hosts for a deadly, mutant breed of the parasite.

The Bay premiered at the 2012 Toronto International Film Festival and was released in 23 theaters in the U.S. on November 2, 2012. It grossed $30,000 during its two-week theatrical run, making it the 24th most successful found-footage film.

Director Barry Levinson was born, raised and still a proud resident of Baltimore. He began with the idea of making a documentary about the Chesapeake Bay, whose once-bounteous crab and oyster fisheries have been devastated by agricultural and sewage pollution, climate change and invasive species.

“I did a little research and found that Frontline had done a terrific documentary about the Chesapeake and all of its problems,” Levinson said in an interview with TakePart. “Yet I didn’t hear a lot of people really up in arms about the dangers. They made a great documentary and nobody paid attention.”

According to Levinson, 85 percent of the content in the film is factual. Both environmental and health science play major roles in The Bay, and they’re mostly presented from the film’s two oceanographers who discover the parasite and the doctor who informs the Centers for Disease Control and Prevention about the developing situation at the local hospital. In one scene, scientists recall a giant isopod that was discovered chewing through a submarine. In real life, this actually happened. The two-and-a-half feet long creature thought the submarine was a whale carcass.

The Bay’s narrative is anchored by Donna, a television reporter who tells the story as a retrospective. Her hushed tone suggests that she’s risking her own safety in order to tell the story. Much of the story involves her showing her own footage as she reported on the Fourth of July town-wide celebration, interrupting the footage occasionally to admit that her journalistic approach to the epidemic was amateurish. She’s seen some disturbing stuff and survived to tell the tale. This adds a personal touch and narrative structure to an otherwise muddled timeline.

Like 2006’s The Host, The Bay provides commentary governmental priority of containing panic at the expense of containing the plague itself. This element of the film might feel a little overly-forceful if the film didn’t so closely mirror problems that exists in real life. Major health issues such as poor regulations on chemical runoff and a broken water filtration system pose real dangers to public health in America, and they’re effectively displayed in The Bay.

Although not as dramatically riveting as Steven Soderbergh’s pandemic thrilled, Contagion, this low-budget chiller is consistently terrifying while managing to stay grounded in its real-life inspirations. The Bay is a technologically adept, thought-provoking eco-horror film that hits close to home.

You can order The Bay on Amazon right host.