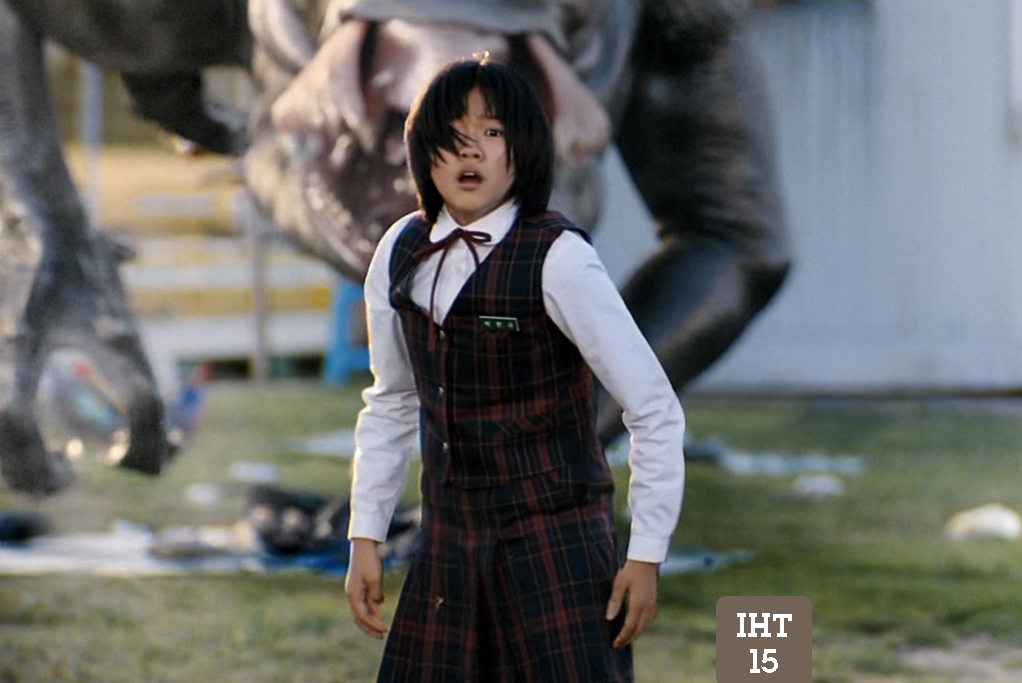 Part family drama, part thriller horror, part political satire, part environmental commentary, The Host is a rare showcase of a film that tries to blend a several unlike film genres and succeeds in every way. The Host is the best and most thought-provoking movie about an amphibious river monster.

First of all, I should mention that we initially tried watching the first few minutes of The Host with English dubs. But when we turned on the English captions to compare what the dub actors were saying versus the script, we found that they varied greatly. So for all you English-speaking horror fans, we found that the watching experience was best with original Korean dialog and English subtitles.

Produced with $11 million budget, The Host is the least indie movie of this bunch. It’s currently the highest grossing South Korean film of all time. The film was released on a limited basis in the United States in 2007.

The Host opens with a scene set in late 2000 (and based on actual events that took place that year). A scientist commands his reluctant assistant to dump over 200 bottles of formaldehyde down a drain leading into the Han River. Over the next few years, there are sightings of a strange amphibious creature in the waterway, and the fish in the Han River are dying off because of water pollution. Here we’re introduced to the film’s monster, long before it grows and further mutates.

We’re then introduced to Park Gang-du, a snack shop owner who seems dim-witted and hopelessly unmotivated. His father helps him run the snack stand, his brother is an unemployed college graduate and his sister is a competitive archer. While Gang-su is serving food to customers, a giant mutated fish with legs and a long giant tail goes on a rampage and kills several people, and returns to the river with Gang-du’s daughter.

This first act brilliantly sets the stage for the primary conflict– a dysfunctional family coming together and trying to rescue the family’s youngest member from the monster. In the process, they must circumvent the government’s sanctions and discover the truth behind the supposed virus that the radioactive creature introduced, thus creating a multinational crisis. Even as the country falls into disarray around them, the family remains the focal point of the entire film.

There is a lot of thoughtful commentary to address in The Host, which is overtly politically-charged (although the message is never overwhelms the cinematic content). The American military that responds to the unnatural disaster is portrayed as uncaring about the effects their activities have on the Korean locals. Additionally, the chemical agent used by the American military to combat the monster, named “Agent Yellow” in a clear reference to Agent Orange.

Although, that’s not to say that the South Korean government is portrayed as heroic– or even competent, in the face of public chaos. The Host seems to make an astute remark about governments’ general inclination to use exaggerated or sometimes made-up crises to deceive or distract the public. The powerfully-acted responses from The Host’s five main performers further highlight governments’ focus on maintaining order and appearing effective at the expense of humane treatment of its people.

Somehow, the filmmakers added a noteworthy sum of comedy in this otherwise tragic story. The Host’s satirical nature makes the film not only thoroughly engaging but consistently, laugh-out-loud funny. And without shifting the focus away from the film’s core drama, The Host pokes fun at each of the character’s background, the South Korean government, its people and generally the public’s counterproductive reaction to major disasters.

The CGI for the monster is detailed and believable. It’s easy to see how the monster transformed from a fish to a giant monster that can sprint on land Especially when the monster swings from the supports under the bridge and when it leaps into the river, the special effects are particularly striking.

The Host is ultimately more than the sum of its meticulously crafted parts. This 2006 Korean release marks one of the greatest monster movies of all time and a much needed departure for the monster movie genre away from the excessive city destruction and mass, heartless fatalities that have made lesser creature flicks so tedious.

The Host can be purchased cheaply on Amazon right here.