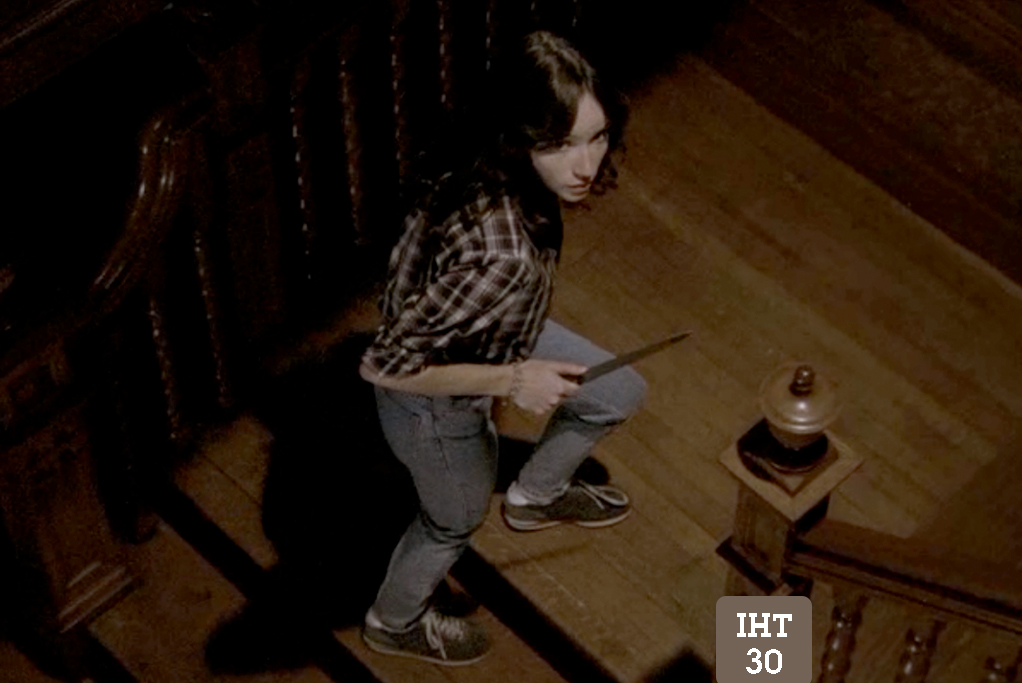 Ah, the 1980s– what a time to be a fan of horror movies– the grainy cinematography, the sudden camera zooms, the exploitation of occult paranoia. Apparently Ti West is a fan as well.

That’s why he wrote and directed 2009’s House of the Devil, which combines elements of both the slasher film and haunted house sub-genres while using the “satanic panic” of the 1980s as a central plot element. It centers around a college student, Samantha, who accepts a babysitting job at a remote mansion only to find that she’s actually been lured into something evil.

The film pays homage to horror films of the 1970s and 1980s, recreating the style of films of that era using filming techniques (and 16mm film) and period set pieces like feathered hair, a Sony Walkman, The Fixx’s 1983 song “One Thing Leads to Another” and a Volvo 240 sedan.

The cinematography of the film also reflects the methods used by directors of the time. For instance, West often has the camera zoom in on characters (rather than dolly in as is now common in film), a technique that was often used in horror films of the 1970s and continued to be used into the 1980s. Other stylistic signifiers include opening credits (which became less common in films in the decades after the 1980s) in yellow font accompanied by freeze-frames and the closing credits being played over a still image of the final scene.

The House of the Devil’s U.S. premiere was at the 2009 Tribeca Film Festival in New York City on April 25. The film was given a limited theatrical release in the U.S. on October 30, 2009. A promotional copy of the film was released on VHS in a clamshell box like the ones that many early films of the 1980s came in. Fortunately, House of the Devil never hinges its appeal solely on its nostalgia value. West’s enthusiastic, resourceful approach to crafting House of the Devil both in the film’s atmospheric dread and frenzied pacing.

Jocelin Donahue plays the bored college student Samantha with a warming sense of familiarity. She’s a typical college girl– irritated by her roommate and by being broke and behind on rent. She’s desperate for money, which is why she accepts such a mysterious job with so many red flags. But she has an innocent quality that makes it easy to root for her to survive the night. Tom Noonan and Mary Woronov play the mystersious mansion owners with an insidious aurora. And brief appearances by long-time Ti West collaborators Adam Bowen and Lenah Dunham are fun additions.

Although it may prove too tame for the short-attention retro-horror seekers who flock to each new year’s batch of formulaic horror remakes, House of the Devil is a finely crafted throwback that should please the fans of classic and contemporary horror alike. It deserves a place right up there with the great atmospheric horror tales like The Wicker Man and Rosemary’s Baby.

You can buy House of the Devil on Amazon right here.