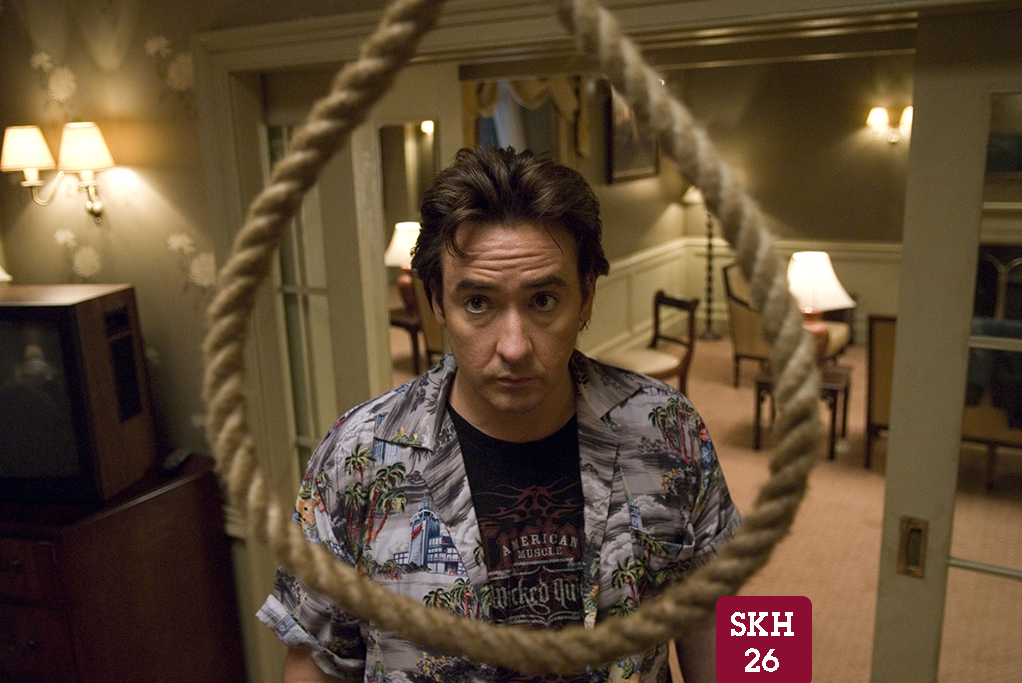 In 2007, 1408 marked a return to the basics for Stephen King adaptations. 1408 centers around an author of haunted tourism books who doesn’t believe in the paranormal. But when he spends the night in room 1408 of The Dolphin Hotel in New York City, he has a violent change of heart.

1408 was adapted from a short story of the same name from Stephen King’s 2002 collection of short stories called Everything’s Eventual. It was directed by Swedish filmmaker Mikael Håfström and co-stars John Cusack as the horror author and Samuel L. Jackson as the hotel’s manager.

The psychological horror film follows Mike penning the final chapter of his latest book on haunted hotels. Although Mike is open to the idea of the existence of supernatural forces, he publicly admits that, in his many travels in the so-called most haunted places in the world, he has never experienced anything that would qualify as paranormal activity.

Mike Enslin: [talk into tape recorder] Hotels are a naturally creepy place… Just think, how many people have slept in that bed before you? How many of them were sick? How many… died?

But his skepticism is quickly put to the test– even before entering room 1408. Mike pointedly notes that hotels often claim hauntings in their facilities when they are in the most dire need of increased patronage. However, not only is The Dolphin an already highly-frequented hotel, they are far from keen on Mike giving room 1408 additional attention.

The hotel manager (Jackson) very aggressively warns Mike against entering– claiming nobody has ever lasted more than an hour in the titular room. The more than 50 reported deaths in the hotel room also range in causes from suicides to “natural” deaths, including one drowning– which mildly disturbs Mike. Nevertheless, Mike enters the room with an audio recorder in hand, which he uses to record voice notes to be transcribed for his books. As 1408 unfolds, it’s revealed that Mike is grieving the loss of his daughter, which led to him parting ways with his wife.

Unsurprisingly, Cusack’s performance is natural and effortless, as the cynical, grieving author whose career largely hinges on a community of readers whom he perceives as naive. Uncharacteristically of the stereotype of horror movie characters, Mike behaves rationally in his attempts to pry himself from the grasps of room 1408. It’s easy to root for him.

In the spirit of Stephen King’s psychological short story, Håfström opted to film four separate endings. But the theatrical ending and the directors ending proved to be a major improvements to King’s original, more open-ended conclusion. Parents in particular will likely find 1408’s emotional endings to chillingly resonant.

Despite its PG-13 rating (don’t worry though, Samuel L. Jackson still gets to say “fuck” once), 1408 is one of the more mature horror adaptations by Stephen King– and one of the more refined. 1408 relies on the claustrophobia of its primary setting, a single hotel room, to deliver psychological scares stemming from Mike’s quickly deteriorating sanity. What’s really happening in room 1408 and what’s happening in Mike’s head? What does the room want out of its visitors? You have to figure it out.

In many ways, 1408 contains some of the most poignant elements of Stephen King’s best work in the horror genre. Like in Carrie, The Shining, and It, the supernatural horror comes to life as a monstrous manifestation of the protagonist’s deepest issues. The horror of room 1408 could be seen as a reflection of Mike’s cycle of grief– he can choose to let the cycle persist or face it head-on.

1408 arrived during a time when horror audiences were growing nauseated by the stream of new horror releases that relied too heavily on gore or torture over slow-building tension and earned scares. By 2007, the massively successful Saw series was four movies in and its success spawned countless copies. 1408 proved to be the perfect palate cleanser for horror fans who craved old-fashion, but effective haunted house scares grounded with heart.

“1408” is available on DVD here on Amazon. And be sure to check out the other entries in the Stephen King Horror-Thon right here on Horror Theory.