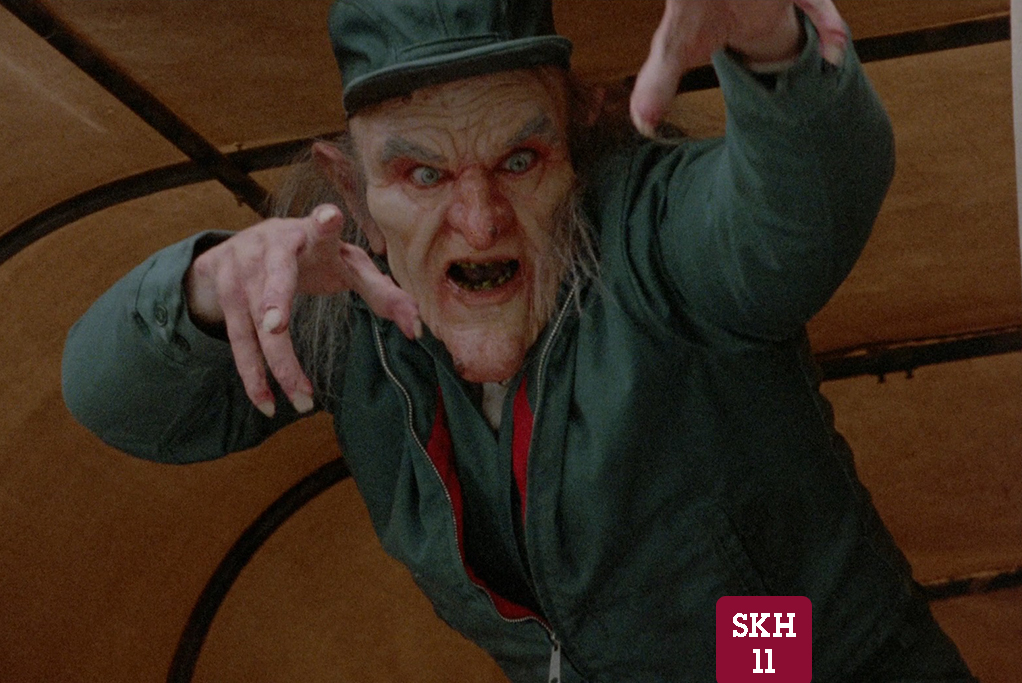 The general consensus from horror fans and critics is that Creepshow 2 pales in comparison to the original. Fair enough, but there are enough charming moments and fun scares in the Michael Gornick-directed sequel to merit it a place on this list. And at least it isn’t the travesty that is Creepshow 3.

Unlike the original, which featured five different stories, Creepshow 2 features only three. Originally, Creepshow was planned to contain five different segments, but Pinfall and Cat from Hell were cut due to budgetary reasons (Creepshow’s budget was $8 million, while Creepshow 2’s budget was $3.5 million). This has been cited as a major reason why Creepshow 2 is a lesser adaptation of Stephen King’s work– as each segment seems to have their run time unnecessarily padded out to stretch the three segments to a full length feature.

But in my opinion, the three segments have strong enough narratives to earn their pacing.

The connecting story that ties the short stories together through its prologue, two interludes, and epilogue centers around a young boy named Billy who (like the Billy in the original Creepshow) is a fan of the Creepshow comic books. When Billy is ambushed by a gang of neighborhood bullies, he executes a plan to use purchases he made from mail-in product ads in the Creepshow magazine to exact his revenge.

Mr. Haig: Here’s your package, Billy. COD, nine dollars and ninety-nine cents. Mighty expensive for a toy ordered out of a funny paper.

Billy: Creepshow is not a funny paper. And this is no toy.

[makes chomping-mouth gestures with his hands]

The segments in Creepshow 2 are varied in styles and tone. The first, Old Chief Wood’nhead, involves a Native American wooden statue who comes to life to avenge a cigar store owners who were murdered by burglars. The second segment, The Raft, follows a group of four college students who are slowly picked off by a toxic black muck in a desolate lake. The final segment, The Hitch-hiker, centers on an adulterous businesswoman who accidentally runs over a hitchhiker who haunts her after the hit-and-run.

Unlike the original, Creepshow 2 doesn’t really alternate tonally between horror and horror comedy. And I can’t say any of the segments really stand out from the others. Old Chief Wood’nhead starts the film off on a serious note, and it does a sufficient enough job providing scares and a unique story elements to justify its run time. The Raft is fun, despite its two-dimensional characters, atrocious acting, and ridiculous special effects for the toxic muck (which I’m pretty sure is just a black tarp in a lake). And finally The Hitch-hiker draws itself out a little longer than it should have, but it watches like an alright Twilight Zone episode.

In terms of horror anthologies, you wouldn’t have to look too far to find some that are much better than Creepshow 2. The horror anthology sequel may not have all the charm or style of the George A. Romero-directed original. But for those hungry for another batch of classic Stephen King goodness, Creepshow 2 is a blast.

“Creepshow 2” is available on DVD, blu ray, and digital download here on Amazon. And be sure to check out the other entries in the Stephen King Horror-Thon right here on Horror Theory!