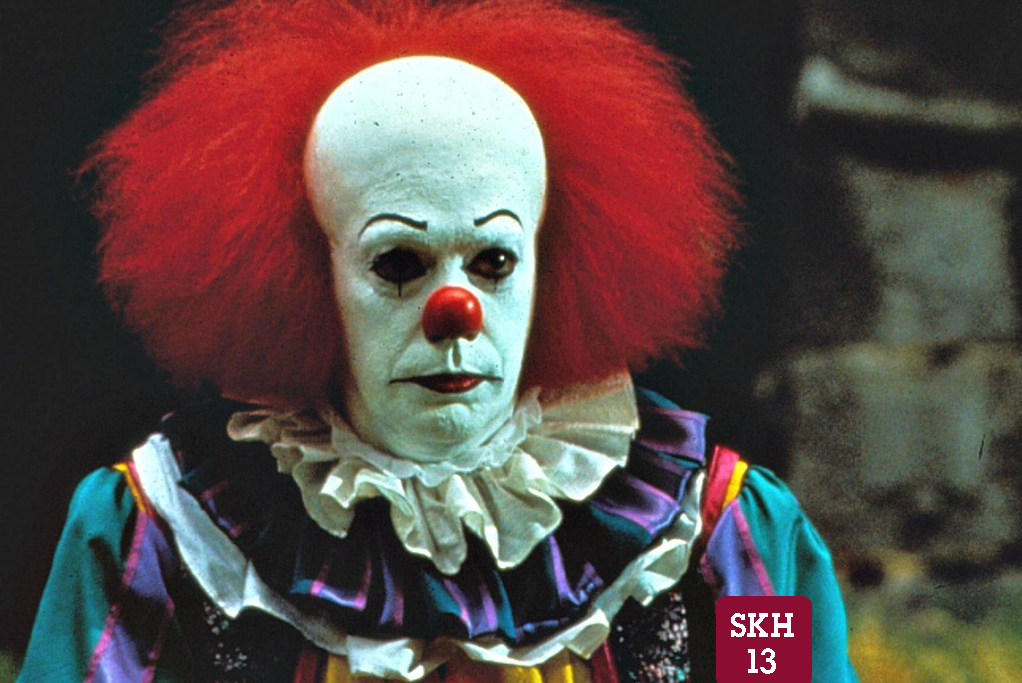 Director Tommy Lee Wallace (Halloween III: Season of the Witch and Fright Night Part 2) had a challenging road ahead when signed on to direct one Stephen King’s most shocking and unsettling horror novels of his career.

It follows a group of outcast kids (dubbed the Losers Club) in the small town of Derry, Maine circa 1960. In the film’s introductory sequence, stuttering kid Bill crafts a paper sailboat for his little brother Georgie, who takes the boat outside during a rainstorm to play with the paper boat in his neighborhood’s watery roads. When his boat floats into a storm drain, Georgie encounters Pennywise the Dancing Clown who tricks Georgie into reaching into the storm drain for the boat before biting his arm off and leaving him to bleed out on the streets.

Pennywise: Ohhh. Come on, bucko. Don’t you want a… balloon?

Georgie: I’m not supposed to take stuff from strangers. My dad said so.

Pennywise: Very wise of your dad, Georgie. Very wise indeed… I, Georgie, am Pennywise the Dancing Clown! You are Georgie! So, now we know each other! Correct?

Georgie: I guess so… I gotta go.

Pennywise: Go? Without this?

A few months pass and Bill slowly befriends the group of awkward schoolmates, who all experience their own terrifying, near-death encounters with Pennywise. As a group, the kids research Pennywise and discover that “It” awakens every 30 years in Derry to feast on the town’s children– and that Georgie was one of his victims. The Losers Club decides to set off into the sewers where Pennywise lives in order to put an end to his murderous path.

The second part of the televised series takes place in 1990 and follows the now adult protagonists who regroup once more in order to return to Derry and fight off the shapeshifting Pennywise once more.

This film is an interesting example of a cinematic adaptation that could have benefited from taking even more liberties from the source materials– specifically towards the resolution. Stephen King has a habit of taking his more epic stories to some odd places in their final acts. In the case of King’s 1986 novel, the story climaxes in Pennywise’s sanctum– deep within the sewer. There, It takes its true form, which is apparently a giant alien spider.

In addition to this feeling a little out of place in the miniseries, the fact that the special effects weren’t up to par also hindered the effectiveness of the Losers Club’s final battle with It.

Of course the highlight of this adaptation is Tim Curry’s (The Rocky Horror Picture Show) performance as Pennywise. Curry steals every single scene he’s in, performing the demented character with a wonderfully creepy glee– even though most of the scenes he plays opposite various lackluster performances of the Loser’s Club both in child and adult form.

It’s a little depressing that after the release of 2017’s cinematic interpretation of Stephen King’s It, the first adaptation miniseries released in 1990 is now seen as an afterthought. And that probably shouldn’t come as a surprise. The 2017 feature is undeniably a finer and more effective presentation of Stephen King’s haunting town of Derry. Its special effects are state-of-the-art; its child cast is superb; and its direction is chilling.

But for those who grew up with the two-part 192-minute original miniseries, It was a nightmare-inducing spectacle that left every viewer permanently afflicted with intense coulrophobia– even if the 1990 television movie peters out during its latter half into a lackluster affair.

“Stephen King’s It” is available on DVD, blu ray, and digital download here on Amazon. And be sure to check out the other entries in the Stephen King Horror-Thon right here on Horror Theory!