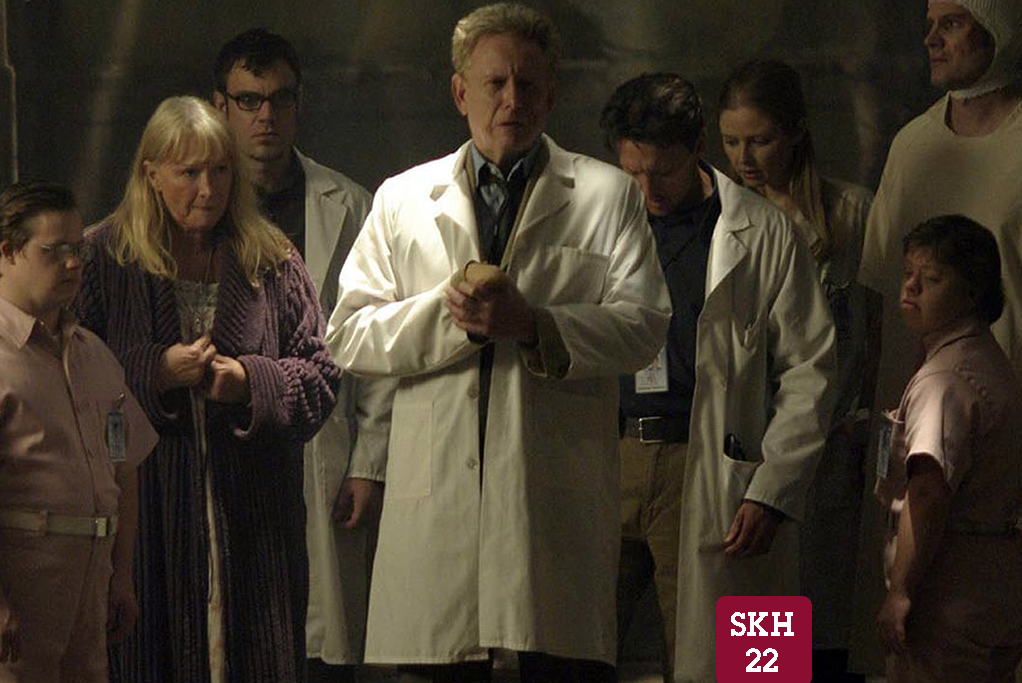 And while critical consensus is that King’s re-imagining pales in comparison to the Von Trier’s source material, Stephen King’s Kingdom Hospital offers some of the author’s most suspenseful made-for-television offerings.

The 15-hour series focuses on the titular hospital, which was original a building that facilitated the manufacturing of military uniforms during the American Civil War. Later a hospital was built on the site, called “Old Kingdom” before the current hospital (known as “New Kingdom”) was constructed.

The series contains several subplots that are tied together loosely. A psychic checks into the hospital for hypochondria and asks one of the hospital’s doctors for assistance in uncovering some of the mysteries of the hospital’s spirits. In another part of the hospital, an artist lies comatose while the ghosts in the facility present themselves to him.

Dr. Egas Gottreich: Here they store what came before. Pain and suffering from days of yore. Before and after, tears and laughter. After comes before, before comes after. Past and future and then, hereafter. The naked and the dead, the young and the old. Their stories end here, their tales untold. Here sickness and death Have left their pages. Written in blood for all the ages. Someday, your story will be here, too.

Despite full support from ABC and a killer U.S. ratings for its pilot, “Thy Kingdom Come” (which premiered to 14.04 million US viewers), each new episode marked a sizable drop in viewership– eventually concluding its season with 3.7 million viewers. This is especially depressing given that Stephen King was rumored to have already completed work on the storyboard for the second season.

Summing up the various episodic narratives would be futile, as each episode is worthy of its own individual review and analysis. In the opening episode, we’re introduced to the many characters when an artist is run over and taken into the hospital, where he experiences supernatural occurrences. In a later episode, “The Passion of Reverend Jimmy,” a priest is crucified behind the hospital by some junkies and begins performing miracles after his death– triggering a massive media frenzy.

Like so many of Stephen King’s television series, Kingdom Hospital suffers from some padded run times and hit-or-miss episodes. It’s easy to dismiss Kingdom Hospital’s shortcomings on its massive ambitions. The 15-hour series was based on source material that only ran for about five hours. Kingdom Hospital aired on ABC and included a huge cast that included the likes of Andrew McCarthy, Jack Coleman, and two Academy Award nominees (Bruce Davison and Diane Ladd).

Tonally, Kingdom Hospital differed greatly from King’s previous body of work, with critics likening the miniseries to St. Elsewhere, Twin Peaks, and American Gothic. And that’s absolutely a positive thing. In episode nine, “Butterfingers,” a baseball player is driven to suicide after he drops an easy catch that cost his team the World Series Championship and is taunted for the short mistake for the rest of his life. Watching the former player be forever tormented by replays and a titular nickname is especially dreadful, as Kingdom Hospital puts you right into the former player’s shoes.

Only the most dedicated horror fans will likely make it all the way through Kingdom Hospital’s 13 episodes. But those who make it to the end are rewarded with the experience of one of Stephen King’s most richly complex television series full of complex characters and wildly imaginative and often deeply unsettling narratives.

“Kingdom Hospital” is available on DVD, blu ray, and digital download here on Amazon. And be sure to check out the other entries in the Stephen King Horror-Thon right here on Horror Theory.