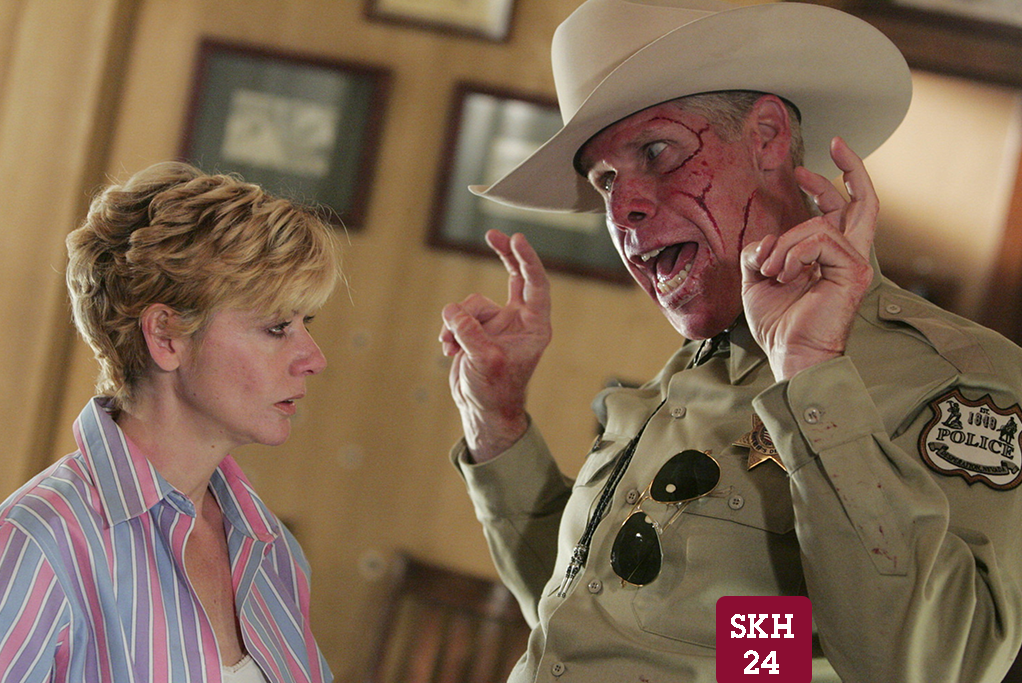 Stephen King’s 2006 television movie Desperation isn’t one of his most well-known novel adaptations, but to me, it’s one of the most nightmare-inducing. And that’s all because of one single reason: Ron Perlman’s demented performance as the human embodiment of the ancient demon Tak.

Desperation primarily takes place in a Nevada desert, where a couple, Peter and Mary, is pulled over by Sheriff Collie (Perlman), who plants a bag of marijuana on them in order to take them into the local police station. There, they discover something is wrong when the police station is mostly empty aside from the dead body of a girl on the floor. The sheriff then shoots and kills Peter, before locking up Mary into a jail cell with a small group of other terrified people.

As the film progresses, more folks are abducted by the increasingly demonic Collie. Some are arrested, some are just murdered. All the while, Collie’s behavior goes from violently abrasive to much worse as his skin begins to break apart and bleed through deep cracks. It becomes increasingly clear that the sheriff is simply a vessel for the demon Tak, who frequently throughout the story switches bodies when they rapidly and gruesomely deteriorate.

Collie Entragian: Son, I will put a stick through your mother, and spin her around til she catches fire, if I so desire! And you cannot stop me, and I’ll come back for you!

Desperation was directed by Mick Garris, who also directed other Stephen King miniseries including Sleepwalkers (1992), The Stand (1994), and The Shining (1997). Of Garris and King’s frequent collaborations, Desperation is one of the most focused and well-paced silver screen adaptations.

Although Desperation was originally written as a two-part miniseries to be aired over two separate nights, ABC instead aired the entire film in one three-hour time slot. Ratings were pretty low however (7.5 million viewers), as it aired during American Idol, a decision that upset King. But those who tuned in caught something truly sinister.

Desperation also features one of the most interesting Stephen King novel dust jackets.

Like so many of King’s novels (especially the ones with more epic scope), Desperation is peppered with religious imagery. One of the prison-bound hostages is a young boy named David, who spends much of the film kneeling and praying and acts as the film’s voice of Judaeo-Christian values. Although some of the adults taunt him for his faith, David recollects a time when prayer saved his sibling and later uses prayer to perform a miracle that helps the gang escape the prison.

While King is no stranger to overt religious imagery, Desperation could be faulted for relying on its religious themes too heavily. Secular viewers (and probably most religious ones too) will likely find many of the more doctrinal scenes to be sappy and cringe-inducing.

How much you enjoy Garris’ adaptation of Desperation could be also dependent on your familiarity with the source material. Those who hadn’t read the 1996 horror novel may be better able to freely dive into the two-hour long film’s deeply unsettling mythology. But consensus from avid Stephen King readers tend to point to Desperation being a disappointing adaptation of King’s work.

Sometimes its narrative seems padded and the scares seem force. But for those who are able to overlook some of its many minor flaws, Desperation is an often thrilling journey through one of King’s most richly complex creations and pure nightmare fuel due to Ron Perlman’s maniacally shocking portrayal as the film’s demonic villain.

“Desperation” is available on DVD, blu ray, and digital download here on Amazon. And be sure to check out the other entries in the Stephen King Horror-Thon right here on Horror Theory.