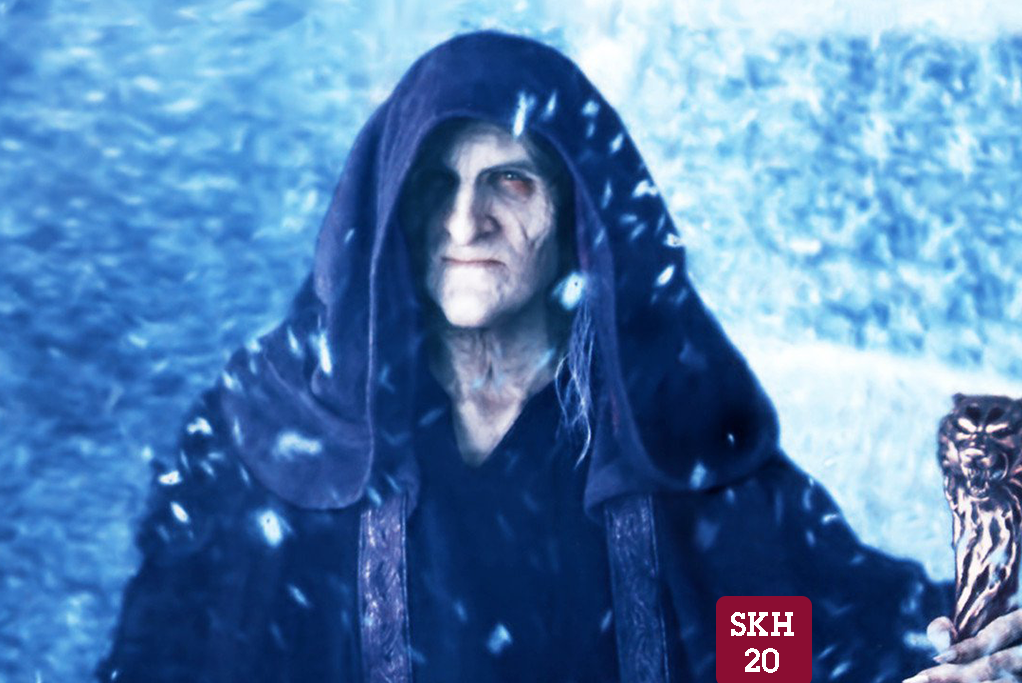 In 1999, Stephen King skipped the novel and went straight to writing the screenplay– with the Craig R. Baxley-directed miniseries, Storm of the Century. And while this was unconventional for the horror novelist, it allowed King to craft a more tightly-structured blueprint for his vision for the film’s story and characters.

Storm of the Century follows a small town of Little Tall Island (the same setting as Dolores Claiborne) in Maine as the town’s residents experience a destructive storm that leaves the island temporarily cut off from the rest of the world until the storm settles. While struggling to shelter themselves from the storm, one resident is brutally murdered by a stranger named Linoge.

Nobody knows who Linoge is or how he ended up on the island during a storm that would have been impossible to travel through. But as Linoge is being imprisoned for murder, he exposes some of the town folk’s darkest secrets– that one resident has been stealing the town’s money to gamble, another resident has been adulterous, another molests children. In a quietly sinister tone, Linoge reveals his one cryptic demand: “Give me what I want, and I’ll go away.” What it is that he wants Linoge takes his sweet-ass time explaining.

The film is narrated by Constable Mike (played by Tim Daly), who imprisons Linoge and attempts to figure out who Linoge is, what his motives are, and how to get him to leave the island in peace. While Linoge is in a cell, he telepathically drives more town residents mad– conjuring terrifying nightmares and driving people to kill themselves. Meanwhile, Mike (a resident of a very tight-knit religious small town) uses clues from the Bible to deduct that Linoge is an anagram for Legion, who was a group of demons cast out by Jesus.

Martha Clarendon: [Linoge rings Mrs. Clarendon’s doorbell. She comes walking down the hall very slowly] Oh, hold on. I’m getting there as fast as I can. I broke my hip last summer, and I’m still as slow as cold molassas.

[she opens the door. Linoge stands in the shadow on the porch]

Martha Clarendon: Can I help you?

Martha Clarendon: I beg your pardon?

Andre Linoge: Born in sin, come on in…

Tim Daly (who’s primarily a television star on such programs as Wings, The Sopranos, and Private Practice) is a highlight of the miniseries. Daly plays Constable Mike with an appropriately frantic energy that highlight’s the character’s love for his local townspeople and his dedication to keep them safe from its malevolent visitor.  Likewise, Colm Feore (24, House of Cards) plays the devil-like Linoge in a carefully sinister yet sometimes charming manner.

Of course with any Stephen King work, the story involves a desperate small town trying to make sense of their trying circumstances. For me, this was the highlight of The Storm of the Century– whenever the towns people worked together or failed to work together by doing what towns folks do: hold town hall meetings, gossip about each other, comfort each other, betray each other, and stick up for one another.

King does a suitably creepy job at expanding on the Legion mythology beyond its telling in the Gospel of Mark and Gospel of Luke. The immortal demon not only terrorized small villages in Biblical times, but he’s also continued his reign of terror in more modern times– most recently in Roanoke Island, North Carolina, where he possessed an entire town to march two-by-two to their deaths into the sea. Like in The Stand, Storm of the Century uses Biblical allusions freely in order to elevate the stakes. And for those who can buy into the premise, it’s chilling.

The Storm of the Century is one of King’s finest miniseries that, despite its 256 min runtime, is an enthralling look at a small island town torn apart and put back together. It’s the perfect miniseries to watch in a dark room during a pounding storm.

“Storm of the Century” is available on DVD, blu ray, and digital download here on Amazon. And be sure to check out the other entries in the Stephen King Horror-Thon right here on Horror Theory.