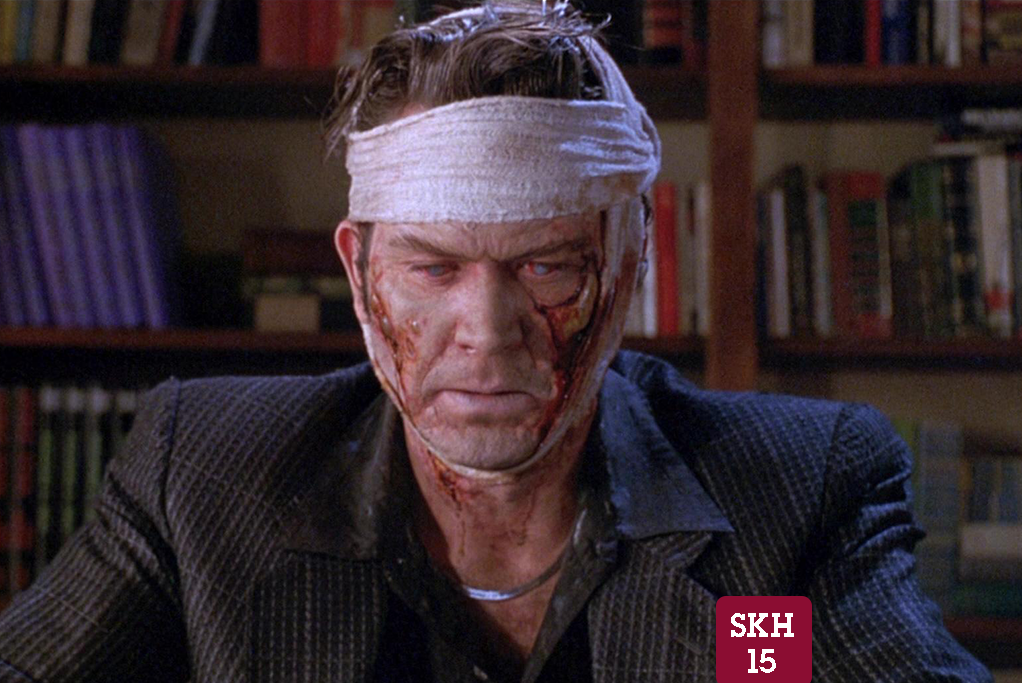 In 1993, horror fans got another George A Romero – Stephen King collaboration in the form of The Dark Half, which was adapted from King’s 1989 novel of the same name. And like so many of King’s previous work, The Dark Half seems to reflect the Maine-based author’s own personal struggles of the time.

The Dark Half follows author Thad Beaumont, who lives in Castle Rock, Maine. Thad is publicly known for his brainy literary novels, but he secretly writes murder-mystery suspense thrillers under a pen name “George Stark.” The Stark books are much more popular and profitable. When someone discovers Thad’s secret and threatens to expose him, Thad decides that it’s time to retire his pseudonym and move on. While doing press, a reporter suggests symbolically burying Stark in a mock grave as a way of saying goodbye. Thad reluctantly obliges.

The next day, a grave keeper finds the mock grave has been dug up– or rather dug out of from the inside. Stark seems to have manifested itself into a physical entity and begins terrorizing Thad’s family and friends and killing locals. And since Stark is essentially a clone of Thad (physically anyway), every crime scene contains evidence suggesting Thad to be guilty.

At least some of this premise probably sounds familiar– and not just the fact that the film follows a similar premise as the Strange Case of Dr Jekyll and Mr Hyde.

By the time of The Dark Half’s release, Stephen King had written several books under the pseudonym, Richard Bachman– including Rage (1977), The Long Walk (1979), and The Running Man (1982). These books were notably darker and more visceral type of horror than most of King’s most famous novels. Similar to in The Dark Half, King was identified as the true author of the Bachman books when a bookstore clerk in Washington, D.C. located the publisher’s records in the Library of Congress. And King was reluctantly forced to acknowledge this fact.

Both Thad Beaumont and George Stark are played by the talented Timothy Hutton, who manages to play the scholarly Thad and the manipulative George seamlessly. However, their relationship with one another never seems as connected as it could have been. Are the two characters polar opposites? Or do they have traits that compliment each other like Batman and Joker? It’s never clear.

George Stark: [voice over the phone, threatening Thad] See if you can figure out where I’m calling from, Thad.

Thad Beaumont: [pauses a second, then realizes] NO!

George Stark: [Thad calls his own home] That was quick, hoss.

The Dark Half contained some interesting special effects including a climatic scene that involves (SPOILER ALERT) a huge flock of sparrows tearing Stark’s body apart. To put the special effects into perspective, The Dark Half came out the same year as the original Leprechaun, Jason Goes to Hell, Cronos, and Return of the Living Dead. And despite The Dark Half being relatively light on special effects, the scenes that do include effects (like the gif above) have aged pretty well.

The Dark Half received mixed reviews at release. There are two major criticisms that horror fans and critics alike seem to have: 1) At 121 minutes, The Dark Half treads on a little too long to remain consistently titillating. And 2) the conclusion feels a little too vague and anti-climatic. And while yes, Romero does indulge himself with lingering scenes with prolonged dialog, it rewards those with the attention spans long enough to pick up on the film’s often clever intricacies.

How much you enjoy The Dark Half is largely dependent on your tolerance for unanswered questions. If you’re expecting everything to come together in the end with no loose ends left untied, you’re going to be disappointed. But if you enjoy putting in the effort (and imagination at times) to try to make sense of King’s sometimes abstract twists and turns, The Dark Half is a fascinating psychological mystery with some genuinely chilling ideas.

“The Dark Half” is available on DVD, blu ray, and digital download here on Amazon. And be sure to check out the other entries in the Stephen King Horror-Thon right here on Horror Theory!