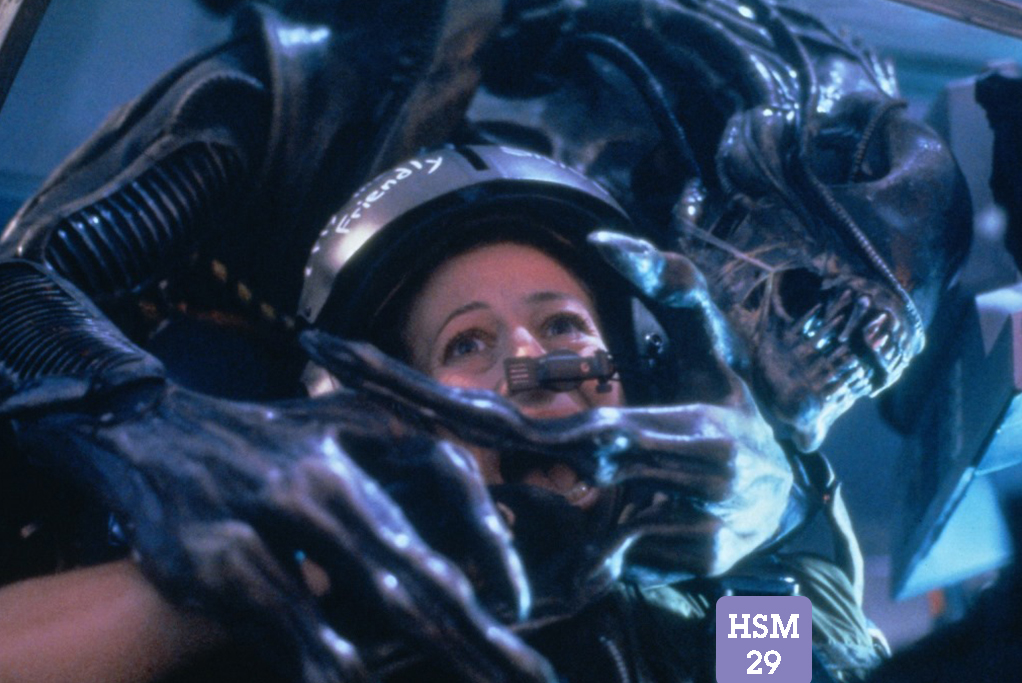 57 years after the original, Ripley (Sigourney Weaver) is awakened from stasis after an alien (singular) attack forced her to destroy her entire ship. In present day, she is taken aboard a ship of her employer Weyland-Yutan Corporation, who are unable to find evidence that her account of the xenomorph’s rampage is true. However, when Weyland-Yutan loses contact to one of their colonies, they ask Ripley to accompany them on a mission as an adviser– in the event that her account of the dead aliens is true.

The original was as a suspense-driven, claustrophobic science fiction slasher, while the sequel contains more expansive, action-packed horror elements. “Aliens” also contains war movie elements, as the protagonists are marine forces rather than a research group like in the original. The militants utilize ‘proximity alert’ technology that warns the group of approaching danger, adds suspense– as each alert usually signals a violent assault.

Sigourney Weaver remains the heart, soul and brains of all four “Alien” films, which is hugely beneficial to the series, because Weaver is a brilliantly complex performer. In the original, she’s almost overcome with the assaults that kill off the rest of her crew. This time around, she’s the only one who’s familiar with the extraterrestrial monsters and how they hunt. It’s much more thrilling to witness Weaver play the hero than the victim– especially in the film’s glorious final act. In the history of great movie heroes, Ripley is one of the greats. 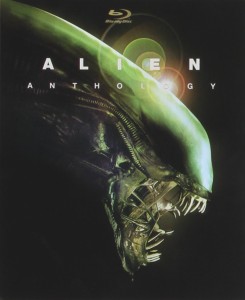 The Alien Anthology box set is the definitive Alien collection. It includes all four films and is available on DVD and blu ray.

Cameron is a notorious perfectionist, and it’s clear with “Aliens.” The writer-director has an apparent reverence for the “Alien” mythology, which is greatly expanded. There’s a lot more xenomorphs on screen this time around, and that allows us to see more of their behavior and their complete life cycle. We see them morph from eggs to facehuggers to chestbursters to adults. And towards the end, we discover an even more terrifying form.

Politics play a major role. Ripley is the only consistently clear-headed character in the series. But in addition to the literal monsters, she’s forced to deal with corporate authorities who put profits above the safety of the crew. Like in the original, we’re never certain who the bad guys are until their actions already produce grave consequences.

More than just great horror, “Aliens” is exceptional science fiction. From the massive and winding set design to the marines’ futuristic weaponry, the attention to detail makes the “Alien” mythology easy to get lost in. Never in the film’s 148 minutes do you ever forget that our heroes are isolated in space. In this sense, the sci-fi and horror elements go hand-in-hand.

In the end, “Aliens” doesn’t have the quiet magnitude of the original. But it raised the bar for science fiction, horror and war movies alike and inspired today’s great filmmakers to craft resonant narratives with thrilling action. Ripley’s sophomore outing brilliantly takes everything great about the original and adds Jame Cameron’s uncanny knack for visceral excitement.

Aliens is available on DVD, blu ray and digital download here on Amazon; and Alien is available here. Be sure to check out the other entries in the Horror Sequel Marathon right here on My Vinyl Muse!