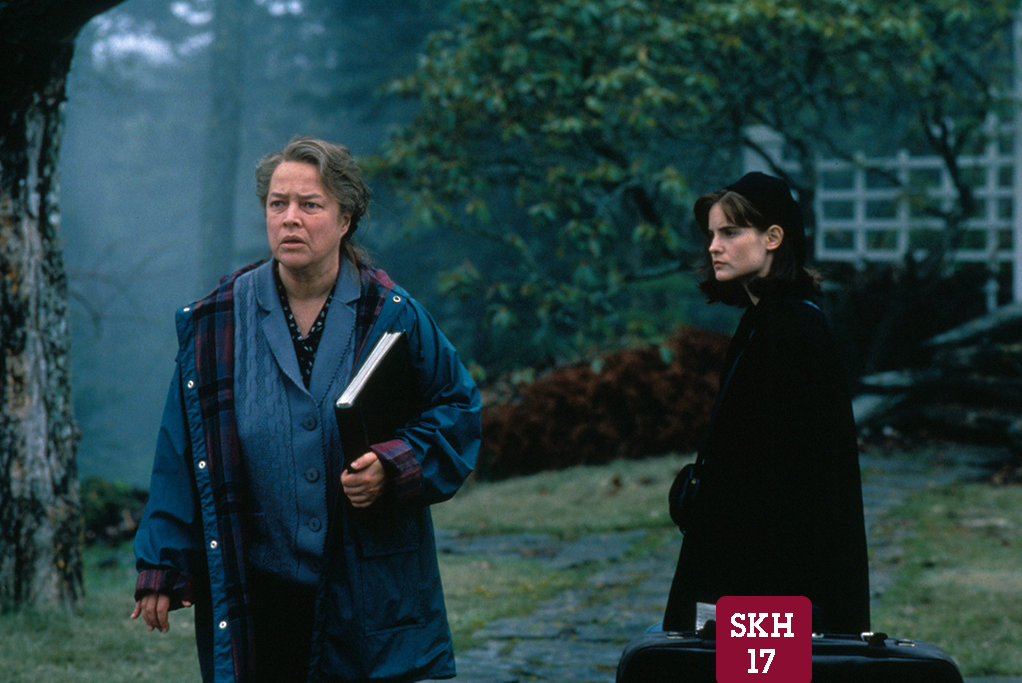 Dolores Claiborne is not your typical Stephen King film. The 1992 novel, unlike most of King’s literature, contains no chapters, double-spacing between paragraphs, or other section breaks. It’s essentially a long inner monologue spoken by an angry, opinionated 65-year-old mother/widow. Not exactly the kind of stuff you expect from the King of horror. But two decades later, it remains one of the King’s finest cinematic adaptations with timeless complexity.

Dolores Claiborne was directed by Tony Gilroy (Michael Clayton, Duplicity) and stars Kathy Bates, Jennifer Jason Leigh, and David Strathairn. Although Bates is better known for her portrayal of Annie Wilkes in the 1990 film Misery, she’s told NPR that her Dolores Claiborne performance is her all-time favorite.

The film takes place on an island in Maine and follows a mother, Dolores (Bates), and daughter, Selena (Leigh). Dolores is a tough but deeply unhappy domestic servant for an elderly employer (Vera). When Vera falls down the stairs of her mansion, a bystander witnesses the aftermath of the fall– which appears like Dolores has murdered Vera. This situation triggers a murder investigation with Dolores as the sole suspect.

When Vera, a successful reporter in New York City who suffers from depression and alcoholism, hears of the investigation she travels back to Maine to be with Dolores– despite the two not having spoken in over a decade. Although Dolores insists that she did not commit the murder, Selena does not believe her. This is congruent with the beliefs of most of the town, who also think that Dolores murdered her husband 20 years earlier.

Dolores Claiborne almost didn’t make it on my Stephen King Horror-Thon– not because of the quality of the film but because of its classification as a drama/psychological thriller. And since this 31-day marathon focuses on only King’s horror adaptations, I initially opted not to include Dolores Claiborne. However, after more consideration (and because I really wanted the opportunity to talk about one of my favorite Stephen King movies), I decided that it should be included.

Firstly, one of my copies of the film (yes, I have multiple copies) is a part of the 4 Film King of Horror DVD Collection. Secondly, when the film was released in 1995, Roger Ebert reviewed the film as a horror movie, writing “This is a horror story, all right, but not a supernatural one; all of the elements come out of such everyday horrors as alcoholism, wife beating, child abuse and the sin of pride.”

And I must say: I agree with his assessment 100 percent. When you think horror films, you’re more likely to conjure images of ghosts, demonic clowns, haunted cabins, giant monsters, and serial killers. But horror film has evolved over the years to cover more human elements. And if you’re going strictly by the dictionary definition of horror (an intense feeling of fear, shock, or disgust), Dolores Claiborne absolutely covers all three.

Much of the film revolves around Dolores and Selena finally addressing issues that had gone unresolved for decades. The film brilliantly tells the story with extensive use of flashbacks. Selena’s repressed memories are a major plot element. Dolores tells her side of the story– both with the death of Vera and the death of Dolore’s husband/Selena’s father.

Not only is Dolores Claiborne one of the finest adaptations of Stephen King’s work (for me, it’s actually tied for best with Stand By Me), it’s also one of the poignant feminist stories of its time. Dolores initially comes off as a cold stubborn old psychopath. But when you get to know her backstory, you begin to admire her spirit– her ability to remain composed under stress and abuse, and then later her courage to take action and stand up to her abuser.

Vera Donovan: Sometimes, Dolores… sometimes, you have to be a high-riding bitch to survive. Sometimes, being a bitch is all a woman has to hang onto.

In Reel Knockouts: Violent Women in the Movies, Dolores Claiborne is described as a self-consciously feminist film that “combines the melodramatic impulse with the investigative structure of a noir crime thriller and a contemporary feminist consciousness.”

Dolores Claiborne contains some challenging subject matter. But it’s dealt with caution and restraint. These are grounded human characters not often seen in King’s often excessive story-telling. The relationship between mother and daughter is one ripped out of the pages of a therapist’s notebook– complete with textbook repressed memories, projected feelings of rejection, and substance abuse. The seriousness of the material never reaches out of the bound’s of Gilroy’s directional grasp.

King fans had already watched Bates performance five years prior in Misery. But the two characters Bates played in these adaptations are incomparable. While Misery earned Bates an Oscar for Best Actress, her character in that film was titillating but ultimately rather two-dimensional when it came to character development. In Dolores Claiborne, we watch Bates flex her acting muscles in a career-defining performance as the steadfast martyr whose haunted by a past she’s determined not to let define her. She’s loud and abrasive, but she’s also deeply caring and protective.

If you look at the elements that make up Dolores Claiborne on their own, the film seems like it was set up to be a disaster. It’s unconventional narrative that tells a story mostly in flashbacks makes it seem like it’d be muddled and pretentious, but it isn’t. The fact that the singular conflict revolves around fed-up women overthrowing their abusive patriarchs makes it seem like the film would eventually dissolve into a preachy, male-bashing hodgepodge, but that never happens.

Dolores Claiborne is hauntingly stylistic, superbly-acted Stephen King adaptation that manages mix all the right ingredients– the chemistry between its mother-daughter leads, some unforgettable lines from Judy Parfitt, and delicate but powerful handling of such touchy subjects as child molestation, addiction, and domestic abuse– into a melodramatic masterpiece.

“Dolores Claiborne” is available on DVD, blu ray, and digital download here on Amazon. And be sure to check out the other entries in the Stephen King Horror-Thon right here on Horror Theory!