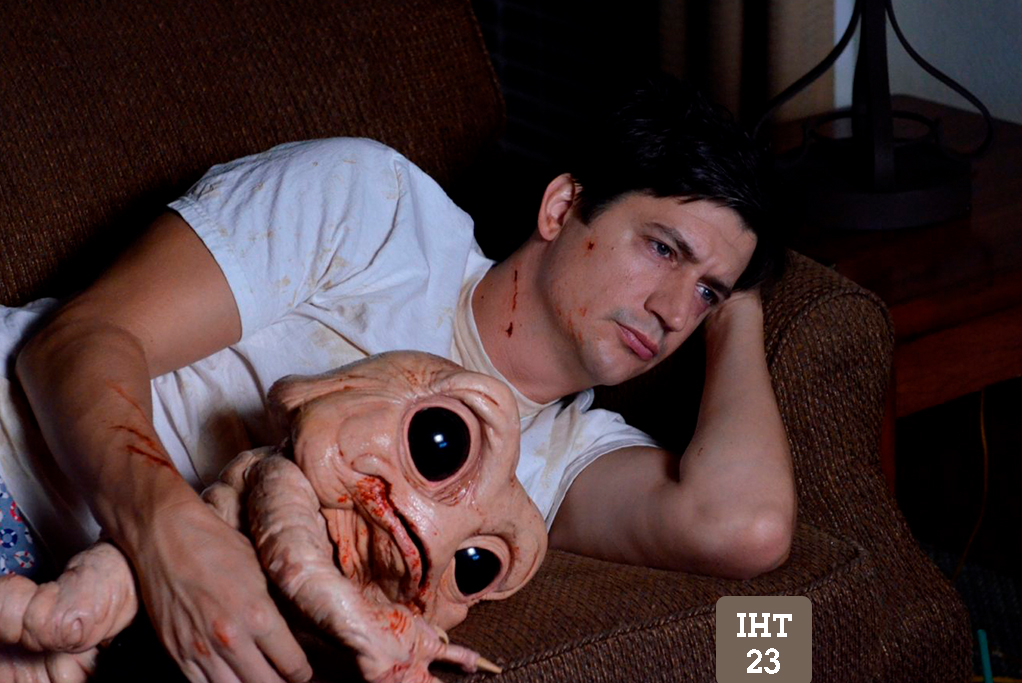 Embrace your inner demon, reads the tagline of last year’s Bad Milo, which takes a more literal interpretation of the expression. The film’s co-writers Benjamin Hayes and Jacob Vaughan (who also directs) share a mutual fascination with twisted creature flicks– an interest that played an important role a few years back when the two sat down to discuss their next cinematic venture.

“We should do a creature feature where the creature comes out of a guy’s ass,” Vaughan asserted. And the concept for Bad Milo was born. The story is centered around Duncan, who’s ripped right out of Office Space. He’s overwhelmed with stress– from his mother, doctor, therapist, boss and buffoonish office mate, all culminating in him developing what his doctor believes to be intestinal polyps.

Soon when the stress becomes too much to bear, he suffers gastric pain and passes out. That’a when a razor-toothed demon exits his butt, brutally kills the source of his stress and returns into his anus before he wakes. If you’re going to find any entertainment value out of Bad Milo whatsoever, you’ll need to accept that premise right off the bat.

The film premiered at the Karlovy Vary Film Festival in June 2013. It was released in 11 theaters in the U.S. a few months later in November.

Ken Marino does an adequate job portraying the stressed-out Duncan, who spends much of movie in excruciating pain. He’s a victim of an unsavory situation, and Marino is generally quite convincing. Gillian Jacobs plays Duncan’s wife, who similarly tries to be supportive of Duncan’s unique situation. Unfortunately, the rest of the cast are mostly uninspired stock characters– the douchebag step father, the uninterested doctor, the kooky alternative therapist and the degrading boss. All of the characters are generally in your-face-outlandish, but too few characters are truly memorable.

What director Jacob Vaughan lacks in subtlety, he makes up for in all the little details that make Milo such an engaging antagonist. Utilizing minimal special effects, Milo was controlled by two puppeteers. One handled the body, and the other handled the expressive face. The Bad Milo production spent one-seventh of its budget bringing Milo to life, enlisting artist Aaron Sims to design the creature and Fractured FX to sculpt him into existence.

As opposed to other horror movies that feature evil, blood-thirsty creatures, Bad Milo showcases a more dynamic monster. He has these adorable buggy eyes, and he often communicates in little puppy-like growls and whimpers. But he’s a little less cute when he’s lunging across the room to stab someone to death with a letter opener. Milo is easy to sympathize with, but not so likeable that you’ll root for his mindless rampaging, at least you’re not supposed to.

Bad Milo’s narrative isn’t entirely void of purpose. Its irreverence is almost balanced out by its attempts at delving into some deeper subject matter. Duncan is a sincere guy with real problems, and he’s trying his best to cope with the menial nature of his routine without disappointing the ones he cares about. There are genuine moments of sentiment to be found, but they’re typically overshadowed by images of a monster crawling out of a man’s rectum.

Ultimately, Bad Milo fails to transcend as a horror, comedy or family drama. It’s not particularly scary or consistently funny, nor does it provide enough relevant commentary to warrant cult status. But with modest expectations, Bad Milo is a fun ride with a few pleasant surprises.

Self-parodying, violent, gorey and sometimes silly to a fault, Bad Milo is certainly the most satisfyingly imaginative horror-comedy I’ve ever seen about an ass-dwelling demon monster.

You can order Bad Milo! on Amazon right here.