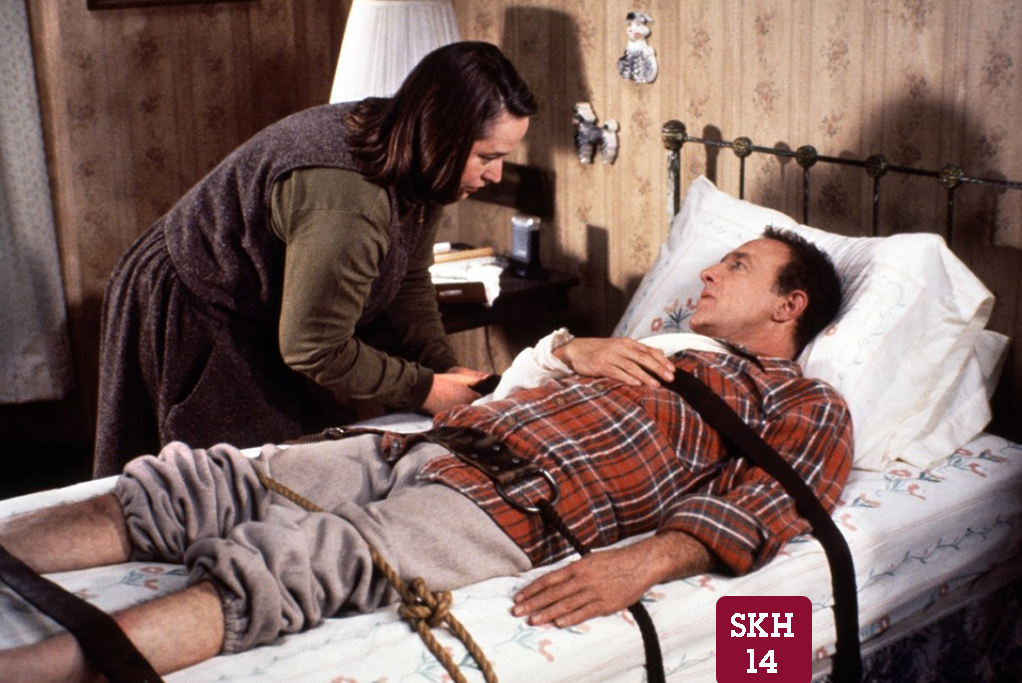 Like Stephen King’s best work, Misery works on several levels. It excels as a dark comedy, a psychological thriller, a sadistic horror movie, and a claustrophobic drama. And above all else, Misery works as a potent allegory with artists’ sometimes problematic relationship with their fan base– possibly mirroring King’s own struggle at the time with feeling trapped in his own reputation for writing almost exclusively in the same genre.

Misery follows Paul, a wildly successful author of a series of romance novels (focused on his fictional character Misery Chastain). Paul has just started work on new novel that will potentially help shift his career away from his “Misery” series of novels, which Paul feels he’s outgrown. While traveling home from Colorado, Paul finds himself in a blizzard and runs his car off the road and is knocked unconscious. A nurse named Annie discovers Paul and brings him to her middle-of-nowhere home to help nurture Paul back to health.

When Paul finally awakens, he becomes acquainted with Annie who insists that she is Paul’s “number one fan” and speaks obsessively and manically about her love for his novels– specifically his Misery Chastain character. With each conversation with Paul, Annie becomes increasingly confrontational– first becoming unexpectedly enraged with Paul’s insistence of using profanity in his forthcoming novel, then again later when Annie discovers that Misery Chastain dies at the end of Paul’s most recently released novel. With each new outburst, Paul becomes less certain of his chances of getting out of Annie’s house alive.

Rob Reiner signed on to direct Misery four years after the release of another King adaptation– the coming-of-age masterpiece Stand By Me. Reiner invited William Goldman (Butch Cassidy and the Sundance Kid and All the President’s Men) to write the script for Misery, instructing Goldman to tone down some of the gorier parts and instead focus much more on character exploration through dramatic and confrontational dialog. Needless to say, this was the right choice.

From Annie’s first outburst, Misery is intensely frightening all the way to its satisfying conclusion. Reiner deserves major props for the pacing of Misery– allowing the violence to build up and then dissipate intermittently. It’s so easy to put yourself in Paul’s perspective and feel the tension. One moment you feel hopeful that he’ll be able to appease Annie’s psychotic demands and escape. The next moment, all of that hope fades away.

The acting is the finest element of Misery. Both James Caan’s performance as Paul and Kathy Bates’s performance as Annie are superb, as they would have to be in order to sustain a mostly dialog-driven film. Caan’s desperation oozes in each scene. You can feel that his character used to dealing with overly-zealous literature fans, and that the fact that Annie feels entitled to his creative prowess is just as agonizing as the physical harm she’s inflicting on him.

Annie Wilkes: [turning to Sheldon] And don’t even think about anybody coming for you. Not the doctors, not your agent, not your family. ‘Cause I never called them. Nobody knows you’re here. And you better hope nothing happens to me. Because if I die… you die.

And then there’s Kathy Bates’ career-defining performance. Annie superlatively treads the line between passionate fan and demented psychopath. She collects porcelain penguins and uses colorful folksy expressions like ‘dirty birdy’ in in lieu of curse words. But when triggered, she descends into an unquenching rage. The fact that you’re never sure when she’s going to flip the switch makes her character all the more unnerving.

There’s a reason Misery is the only Stephen King adaptation to ever win an Oscar (for Bate’s performance). Misery is a rare slow-burning horror classic that manages to stay relevant even decades after release. It’s terrifying, simplistic, and deeply unsettling.

“Misery” is available on DVD, blu ray, and digital download here on Amazon. And be sure to check out the other entries in the Stephen King Horror-Thon right here on Horror Theory!